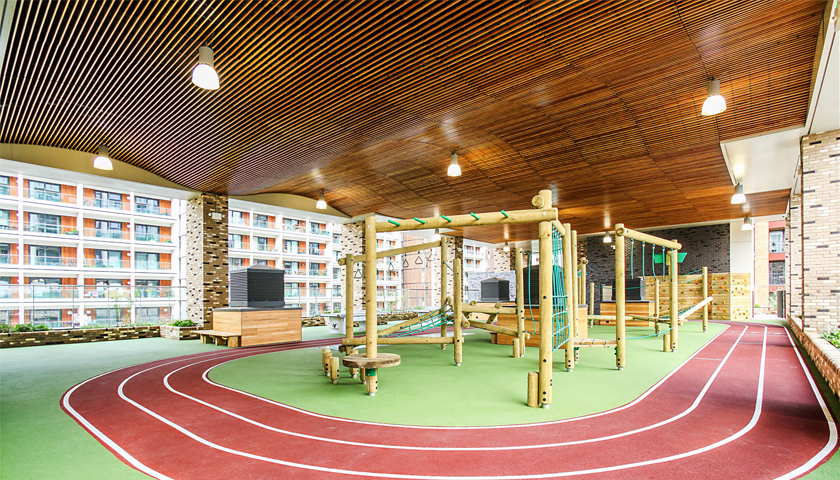 In a pioneering scheme, Holy Trinity Church of England Primary School in Beechwood Road, Dalston, is having a new school that is incorporated into a mixed-use-development. The London school certainly has the “wow” factor, after its high-rise play area was fitted with a striking Hunter Douglas wood ceiling. The pressure on the limited site led to developer Telford Homes coming up with an innovative solution. The school’s spaces incorporate a covered multi-use games area (MUGA) and informal play area on the roof of the school. This space includes a striking bespoke ceiling design by Hunter Douglas, a leading global manufacturer of architectural products. Hunter Douglas was appointed to manufacture and oversee the installation of the £106,000 ceiling. Kevin Taylor, a technical sales manager at Hunter Douglas, said that the two areas of the MUGA each comprised approximately 450m2 and was designed so that there were flat and undulating sections. The ceiling not only adds a distinctive architectural design element to the play areas but also conceals the services to the apartments above. “Although the design and manufacture of the ceiling grilles was fairly straightforward, the logistics of getting them on to the site and up to the second floor was trickier because space was very limited,” said Kevin. “It meant many more journeys than usual to get the grilles up to the MUGA area and we had to use cherry pickers to get them to where we needed.” The result is a striking ceiling design that enhances the new school’s covered MUGA. Utilised for PE and sports activities it comprises a large climbing frame, three-lane running tracker, table tennis, air hockey, climbing wall and gymnastics zone. This addition to the school makes it a facility fit for the 21st century that will be able to accommodate growing numbers of pupils.