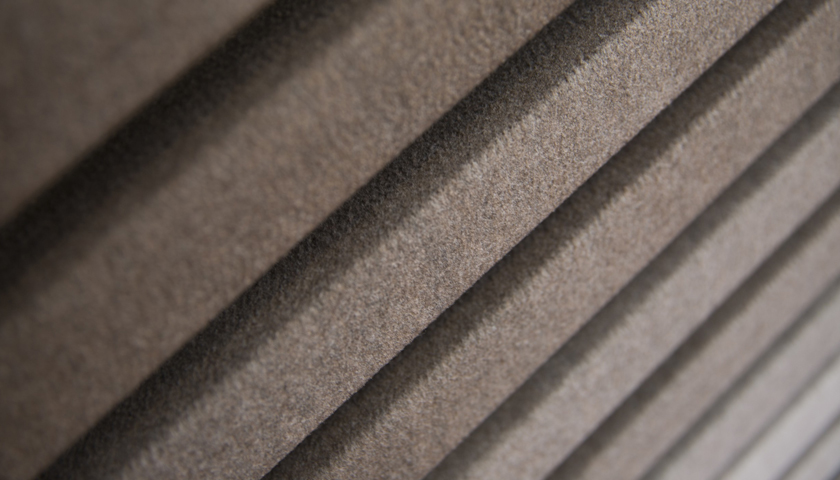 The panels in cream, light brown, medium brown, dark brown and umber, blend in seamlessly with materials such as wood, and complement the five grey shades that launched the Hunter Douglas system, plus black and white, which were also added to the palette.

“We believed there was a need for our felt ceiling to fit in with other popular materials, such as wood,” he said. “With the earth tones palette it is possible to imitate the natural look and feel of wood.”

The HeartFelt® ceiling system, described as “one of the best products of 2017” by the Red Dot award judges, is budget-friendly and all of it, including the carrier system, is made from 100% recyclable material. It is also the first to be manufactured from cradle to cradle-certified felt.

Three soft greys were selected for a 150m2 canopy within a 17-metre high central atrium, providing the ideal foil for the building that has wide spaces and uses large swathes of wood and plate glass windows.

It is a natural and soft material with a warm appearance and excellent acoustic properties, which makes it an attractive choice for architects seeking sustainable products for projects.

The system was first used in Europe at the £15 million headquarters of Moneypenny, the outsourced switchboard and telephone answering service, in Wrexham, Wales.

Heartfelt® complies with regulations for use in non-polluting buildings, is resistant to dirt and dust, meets the indoor European standard EN 15251, and EN 13501 Class B, S1, d0 fire certification.

The panels are manufactured using thermoformed polyester fibres, which are 100% recyclable – earning the system C2C Bronze certificate from the Cradle to Cradle Products Innovation Institute.