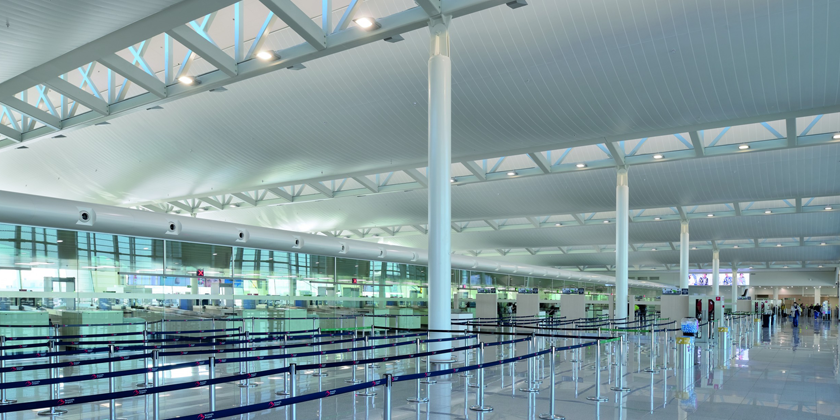 The Connector is a €71 million above-ground structure which connects two terminals at Brussels Airport in Belgium. The out-dated piers have been transformed, thanks to a new state-of-the-art building featuring a Hunter Douglas metal ceiling.

The two piers have very different architectural features and the aim of the new linking building was to bring the two areas together. One of the most striking features of the new structure is the customised 300C shell-like roof structure manufactured by Hunter Douglas. Erwin Persoons, architect with the agency who designed The Connector, said the design naturally raises the ceiling little by little. Pieter van Rees, European Marketing Manager at Hunter Douglas, says with the role of airports evolving from being a place where people waited to board a plane to a more commercial experience, it means better quality facilities are needed.

“The result is that the aesthetic and acoustic functions of the ceiling are becoming more important than they already were,” he says. Hunter Douglas perforated metal ceiling panels contain an acoustic membrane, which gives them a high degree of sound absorption. They are also detachable, allowing easy access to services and for maintenance. The bespoke Hunter Douglas 300C ceiling used in Connector was designed to meet the demanding aesthetic and acoustic requirements of the airport. The ceiling areas are 15 metres wide, 50 metres long, and are also curved, which makes them fully integrated with the roof.

For more information on our architecural metal ceiling range take a look on our website.