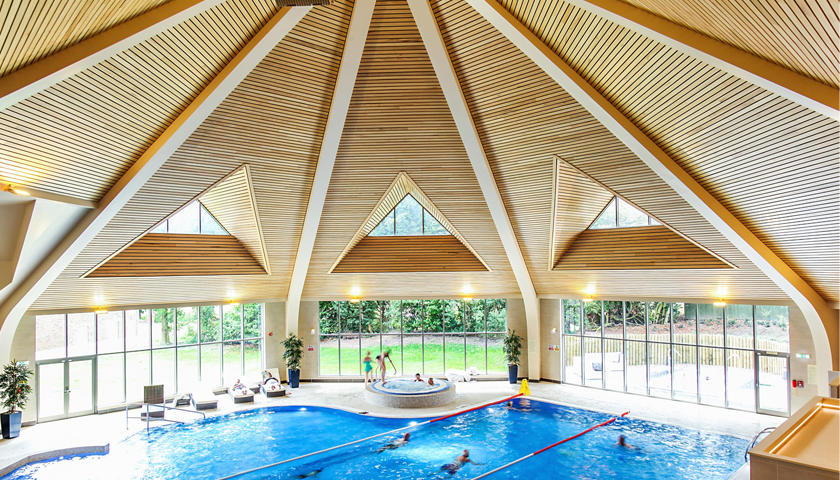 When specifying a wood ceiling for a leisure facility there are many considerations that must be made.

This was never more true than on the build of the state-of-the-art Clubspa and Evergreen Spa at Kenwick Park Hotel in Louth, Lincolnshire, which opened in July 2016, 20 months after its former leisure facility was destroyed by fire.

The building features a 20-metre indoor swimming pool which was completed with 600m2 Hunter Douglas module linear open solid wood ceiling system. One of the most important aspects of the ceiling design was that it should look as similar as possible to the original timber ceiling. This was because it held a special place in members’ hearts.

Specified in African Ayous on a corrosion-resistant suspension system, the exterior grade multi-faceted ceiling, was complex in design and installation due to the shape of the triangular openings that were formed by the roof structure, into which the solid wood ceiling had to be installed.

David Harris, general manager of Hunter Douglas said: “This was another successful swimming pool installation for us and it was great to see how good the eye-catching design looked in its new home.

Our linear open ceiling is one of the most popular options because it is visually attractive.” As you would expect for a leisure centre environment, the wood panels are finished on all sides with a water-based varnish, and they are impregnated with Magma Firestop, which achieves Class ‘0’ BS476 fire rating.

The wood panels also have Hunter Douglas’s standard non-woven acoustic fleece bonded to the back of them, which closes off the void visually but still allows sound to be absorbed by the ceiling. Hunter Douglas worked closely with Elmsmere Engineering, the Hinckley-based installation company, to ensure that the ceiling was installed quickly and without complications.

For more information about Hunter Douglas and their linear wood ceiling systems visit our website.