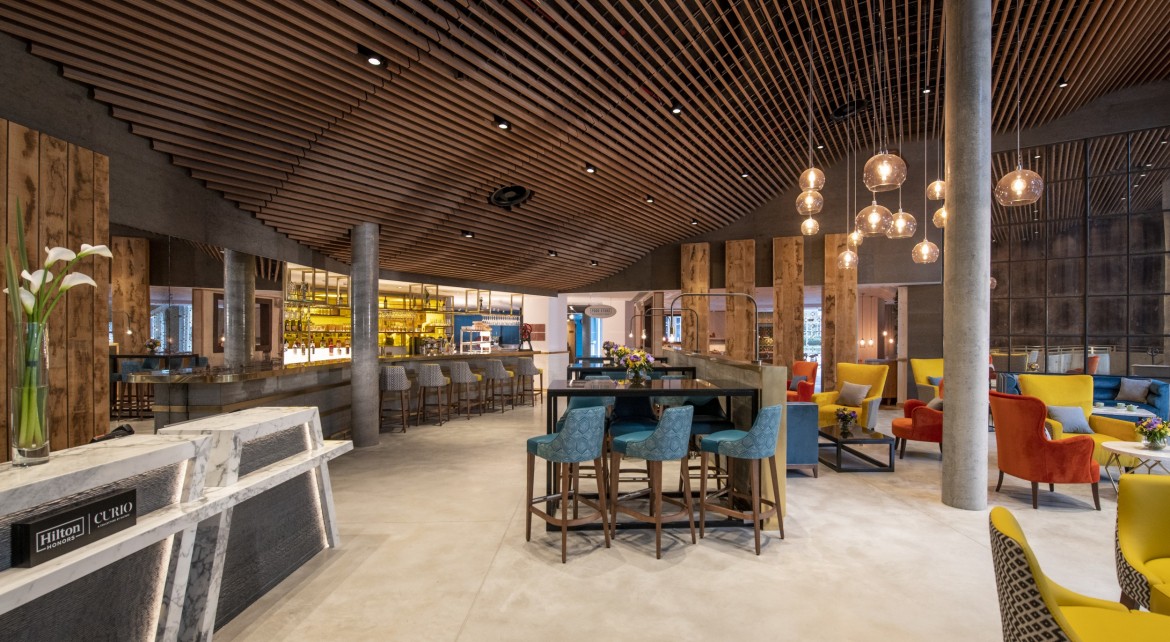 A four-star hotel in the financial district of Canary Wharf, London, which draws its design inspiration from the area’s industrial heritage, has been enhanced with a Hunter Douglas Architectural ceiling that has the ‘wow’ factor.

When guests first enter the Lincoln Plaza London, which is part of the Curio Collection by Hilton, they are greeted by a distinctively designed lobby / bar area – with a stunning Hunter Douglas Architectural solid wood open grill ceiling.

“Most people look up when they come in and say, ‘wow’, which is just the reaction we want,” he said. “The unusual wave shape is a nod to the water that is around the hotel and it is an impressive addition to the interior design. The attention to detail is incredible. It creates space and certainly sets the mood and tone.”

The hotel is part of the high-rise Lincoln Plaza deluxe apartments and it was fitted out by Fileturn, which commissioned high-spec interiors including a feature polished concrete spiral staircase, polished concrete floors, steel feature walls, Crittall-style windows and reclaimed materials such as railway sleepers.

The original specification for the lobby ceiling was for a curved timber grill ceiling in Cambara wood, but when that was design engineered out of the specification, Kevin Taylor, of Hunter Douglas Architectural, suggested using Ayous wood instead and staining it the same colour as Cambara.

This more economical option was agreed – yet the finish is still first class. Hunter Douglas Architectural was specified to supply 200m2 of open solid wood grill ceiling in 3-100-30-120. The lengths were designed to fit with minimal onsite cutting required and to make the panels curved, a plastic pipe was used for the connecting dowels in lieu of rigid aluminium.

The undulating, wave effect ceiling was fitted on to a specially designed and created curved carrier and fixed into place with standard ‘J’ clips.

Hunter Douglas Architectural also supplied a multi-panel ceiling for the back-of-house corridor, consisting of 150m2 of different height and width white panels all on a single carrier type. The ‘un-pronged’ carrier had the panels fixed with appropriate size clips for each panel width, which enabled the panels to be ‘fanned’ around the curved sections of the corridor, which is the shared access for apartment owners and hotel guests to the spa area.